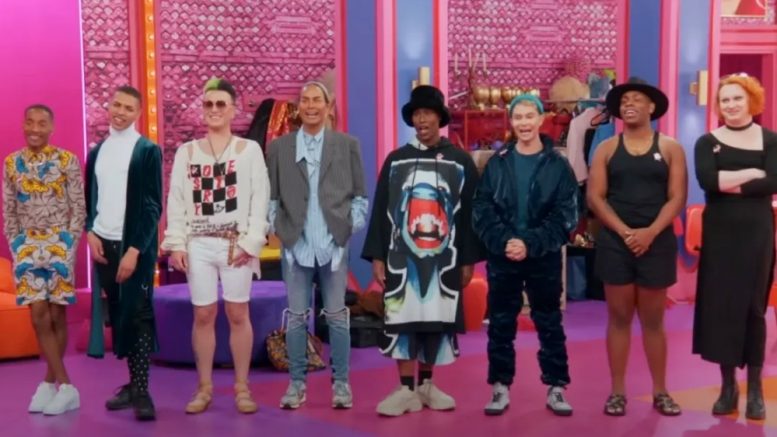 Jinkx Monsoon vs. The Vivienne on RuPaul’s Drag Race All Stars, Willow Pill and Kornbread at the beach, and more!

Our season seven All Stars gave advice to the graduates of Drag U (RIP… never forget) and walked the runway in fierce, veil-themed outfits this week.

If you missed last week’s she-larious Fairytale Justice challenge and spiked runway outfits, our favorite Ru-cappers are here to fill you in on the week’s hits and misses (which I don’t believe there were any).

In addition, we check out Trixie Mattel’s new reality show, take a fashion trip down memory lane with Latrice Royale, and watch season 14 champion Willow Pill in a new video. Let’s get started! We’ve got a lot to talk about, so let’s take it to the runway!

The battle lines are formed this week on RuPaul’s Drag Race All Stars between the previous week’s victor, The Vivienne, and clear frontrunner, Jinkx Monsoon. Mama Ru challenges our queen-testants to give an outstanding commencement address, emphasizing the importance of passing on knowledge.

Nikki Glaser, a comedienne, is coaching the queens, and the results are quite inspiring… Raja’s spiritual advice and Jinkx’s (real) run-in with a car in Amsterdam made Ru laugh out loud.

The runway theme this week is “Veiled It!” and every outfit we saw was All-Star-worthy, especially Monét’s gorgeous feathered gown and birdcage headpiece, Raja’s magazine cover eleganza, Shea’s accordion-pleated ode to her gardening Gram, and Jinkx’s butterfly-adorned lavender gown. Jinkx and Raja were our top two this week, and they performed a vivid lip-sync to Lizzo’s “Better in Color.”

Jinkx wins again and chooses to block The Vivienne, while the top two queens get to bestow a Legendary Legend Star on one of their other queens next week. In the opening act of the show, see the birth of the Viv and Jinkx rivalry, and subscribe to Paramount+ to catch up on all of the drama.

The queens faced Judge Michelle Visage in “Fairytale Justice” on last week’s All Stars, presenting some magnificent spiked looks on the catwalk. On the latest episode of “The Pit Stop,” Bob the Drag Queen brings you the highlights – and welcomes her season eight sister, Naysha Lopez.

Last week’s runway was rather impressive, and Yuhua Hamasaki and Shuga Cain share their “Bootleg Opinions” on the “Spikes on the Runway” designs.

Last week’s “Fairytale Justice” task was a success, according to the judges, with strong performances from all of the queens. On the latest episode of their podcast, “Queening Out,” Joseph Shepherd and Laganja Estranja discuss the episode.

Our All Stars queens are being put to the test by Glamour magazine in a “Friendship Test.” They give their first impressions of each other, do trust falls, play a few (admittedly difficult) games of Drag Race trivia, and respond to rapid-fire questions about each other.

The gorgeous Sharonne was elected queen of Drag Race Espaa season 2 last week, and all of the queens returned to the runway to show off their greatest drag looks. In the season’s last “Fashion Photo Review,” Alexis Mateo and Choriza May toot and boot the ensembles. I, for one, am eagerly anticipating season three.

Trixie Mattel is a cosmetic artist, a talented vocalist, an author, and a fantastic performer, and now she has added hotelier to her portfolio. Trixie Motel, her new show, premiered on Discovery+ this week, and you should check out this sneak peek, which features RHOBH star Lisa Vanderpump.

In other “Trixie, take my money” news, she debuted new gear to go along with her new Blonde and Pink double albums, which will be released on June 24. I’m in desperate need of those nails right now. You may listen to a preview of her new music here.

On “I Like to Watch,” Trixie and Katya watch and respond to season one of the Netflix series Young Royals.

Get your bats out! Who better than our two favorite non-athletic drag queens to speak about sports? The couple discuss all things athletics on this week’s “UNHHH,” including gym showers, how they would act as Olympic champions, their ideal athletic physiques, and much more. It’s yet another gold-medal episode.

Get a handle on yourself, girl! Latrice Royale is the most recent queen to “Come Out of the Closet” and invite us into her house in Florida.

She talks about her pageant experience and flaunts her stunning and iconic looks (including the meme-famous Large Marge from the season four Tuckahoe Prison challenge.) She also discusses doing drag on the fly, her passion for all things fashion, and her admiration for Lashawn Beyond’s many design talents. I need to track down a pair of those gold platform shoes in my size.

Let’s take a look back at Symone, the season 13 champion. In this interview, she talks about putting together a look, receiving a DM from Rihanna, walking the runway at the Savage x Fenty show, and her future role in the Billy Eichner film Bros.

In the newest “Sibling Watchery,” Bob and Monét take a journey back to season eight of Drag Race, where they explore the “Bitch Perfect” girl group challenge and the movie awards runway.

PS – If you can’t get enough of Bob (and who can? ), A Joke’s Stand Out: An LGBTQ+ Celebration, starring Trixie Mattel, Matteo Lane, Judy Gold, Joel Kim Booster, and Scott Thompson, is streaming now on Netflix.

It’s time to get your pink on! Jaymes Mansfield is always a dye queen, and in this video, she tests out the new hair color kit from Trixie Mattel X Good Dye Young (the company founded by Hayley Williams of Paramore).

In her most recent vlog, Laganja Estranja takes us on a solo excursion to Provincetown and Boston.

Milli-Rock (also known as Milli-Rock, Mill Rock M Sakura and Militia Scunt react to edging videos on Facebook. I’d never heard of these before, but now I’m aware of them. It’s finally over.

And that concludes this week’s activities. We teased the new Willow Pill video, so here it is: Willow introduces her season 14 sisters Kornbread, Kerri Colby, and June Jambalaya, as well as Dragula’s Landon Cider and Jiggly Caliente in the new “Angle” video. Stay safe, stay healthy, stay proud, and say love until next week!

NFL Aaron Rodgers, the king of drama, has gotten a lot of flak on Twitter for his so-called update. The Aaron Rodgers “update” report from…