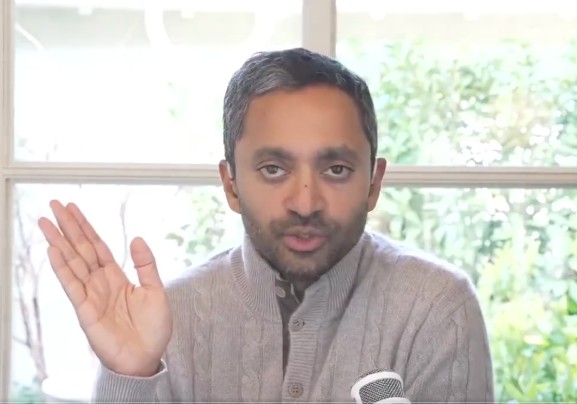 With the 2020 Winter Olympics in Beijing just 18 days away and US diplomats boycotting the games over what the US Embassy in Beijing recently described as China’s “ongoing genocide and crimes against humanity in Xinjiang, as well as other human rights abuses,” one of the NBA’s most outspoken owners weighed in.

Billionaire Chamath Palihapitiya, a minority owner of the Golden State Warriors alongside majority owners Peter Guber and Joe Lacob, spoke out about China’s persecution of the Uyghur minority-muslim population in the Xinjiang autonomous area, calling it “a very hard, nasty truth.”

“No one is concerned about the plight of the Uyghurs. You bring it up because you care, which I think is admirable because the rest of us don’t,” Palihapitiya remarked. “I’m going to tell you the truth, okay?” Yes, that is beneath my line among all the things that I care about.”

Palihapitiya is described as “a limited stakeholder who has no day-to-day running functions with the Warriors” by the Warriors’ public relations department. He “does not speak on behalf of our franchise, and his views surely do not reflect those of our business,” it continued.

The statement was made during a discussion regarding President Biden’s popularity and policies between Palihapitiya and his co-hosts, Internet entrepreneur Jason Calacanis and early Google employee David Friedberg.

“I think we have a responsibility to take care of our own backyard first,” Palihapitiya added after Calacanis applauded Biden’s China strategy.

Calacanis said that while the United States is far from ideal, a comparison to China’s human rights situation is flawed.

“The what-aboutism you’re proposing is so disproportional to the Holocaust that’s going on right now — we’re talking about a million Uyghers in concentration camps right now — to talk about what we have here and need to fix [and] to compare it to there or to Saudi Arabia whipping bloggers and throwing gay people off roofs for being gay…these two things are not morally comparable,” he said.

The conversation begins around 14:30 in the video below.

China has had a tense relationship with the NBA. In 2019, the entire league was canceled by national broadcaster CCTV after a single tweet from then-Houston Rockets general manager Daryl Morey supporting pro-democracy activists in Hong Kong.

It took over a year for China to allow league games to be broadcast on state television once more. Last year, CNBC estimated that the NBA’s China operation is worth at least $5 billion, including a $1.5 billion broadcast rights deal with Tencent, a Chinese tech company.

Last year, Celtics games were removed from Tencent in China due to Enis Kanter’s support for Tibet and opposition to the Chinese government and its “brutal tyrant” Xi Jinping. Kanter, a Muslim, upped the ante a week later, criticizing the country and Nike for their treatment of ethnic minority Uigher workers in its factories. In a Washington Post exposé, those conditions were described.

Most NBA players, of course, wear Nike shoes in every game. Nike also provides the league with jerseys and lucrative shoe contracts for its top players. Leading athletes like LeBron James — who reportedly has a $1 billion “lifetime contract” with Nike — have struggled to respond meaningfully and have received backlash as a result.

Palihapitiya, who is currently a venture capitalist and was once Facebook’s VP of “user growth,” a Democratic party fundraiser, a World Series of Poker and World Poker Tour winner, and a rumored California gubernatorial candidate, went on to say:

“I’m not convinced China is a dictatorship in the manner you want to define it,” Palihapitiya replied after Calacanis referred to China as a terrible dictatorship.

“This issue could be that little data points are being stretched to create a narrative that isn’t real,” he stated.

“When genocides happen, it is people like these who allow them happen,” Kanter said on Twitter this morning, displaying a clip of Palihapitiya’s statements.

When @NBA says we stand for justice, don’t forget there are those who sell their soul for money & business like @chamath the owner of @warriors,
who says “Nobody cares about what’s happening to the Uyghurs”

When genocides happen, it is people
like this that let it happen

U.S. politicians on the right have also begun blasting Palihapitiya.

ALL that matters to them is more $$ from CCP so NBA millionaires & billionaires can get even richer.#Shameful https://t.co/5h7PLhFLKT

Sickening. More proof the NBA will cozy up to Communist China at all costs, rather than take a stand against Xi’s human rights abuses and targeting of the Muslim Uyghurs. https://t.co/uTYplKBdMF

We’ve always known that the @NBA & many of its owners are happy to put profits over people. Now @chamath is saying it plain as day: he doesn’t care that Communist China is committing genocide against the Uyghurs. He doesn’t care that millions are sent to forced labor camps. (1/2) https://t.co/GsvSTrD2Uo

If the @NBA truly stands for justice, they will denounce these comments by @chamath and denounce the CCP’s genocidal oppression of the Uyghur people in Xinjiang. pic.twitter.com/rEzarGpS64