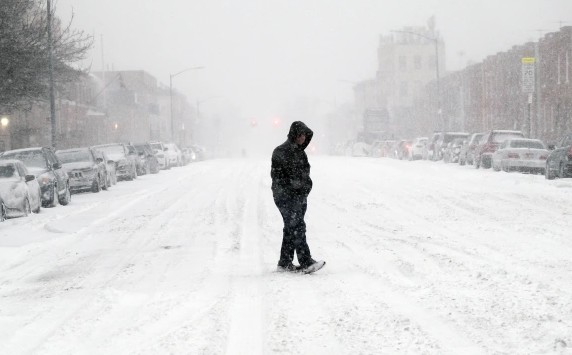 Other Yorkers can truly claim to be unbothered on a whole new level! One man demonstrated online how little snow bothers New Yorkers. Over the weekend, Zhané Caldwell of News 12 Brooklyn interviewed Donnell, a Brooklyn resident. Even as the snow whooshed and whirled all around him, his calm and controlled manner made internet users smile.

On Saturday morning, reporter Zhané spoke with Donnell about the snowy circumstances. She was the one who first presented him to the viewers of the network. Then Zhané inquired as to what had led Donnell out into the snow. “I’m in love with the snow.” I was born and raised in New York City. Looking off into the horizon, Donnell replied, “This ain’t nothing to me.” “I’m here, baby, Brooklyn’s finest.” It’s fantastic. It’s fantastic. It makes me happy.”

Donnell took a sip of his coffee afterward, just as Zhané inquired about the cup in his hand. He paused in his sip to raise his cup to the falling snow. “Oh my god, it’s good, had to,” he said of the warm sipping. Donnell typically stared out into the distance while holding up his glass, but he also looked into the camera.

Zhané points out that he’s not wearing gloves in the middle of a snowstorm at this time. “You’re not wearing gloves, nothing, you’re just…” she continued before trailing off. Donnell jumped in right away, nodding his head no.

“This ain’t nothing,” Donnell stated of the snow, referring to his upbringing in New York City. “However, it’s only going to grow worse, so I’d encourage you to remain home and keep safe.”

“Where are you headed next?” Zhané inquired after Donnell’s response.

“I’m really hoping for my job to open, but it looks like they might not,” Donnell said. “In the meantime, I’m just going to chill.” While he sipped his hot beverage, the snow continued to fall heavily.

New York City, as you may have noticed, was hit by blizzard-like conditions over the weekend. According to NBC New York, different places experienced seven to thirteen inches of snow.