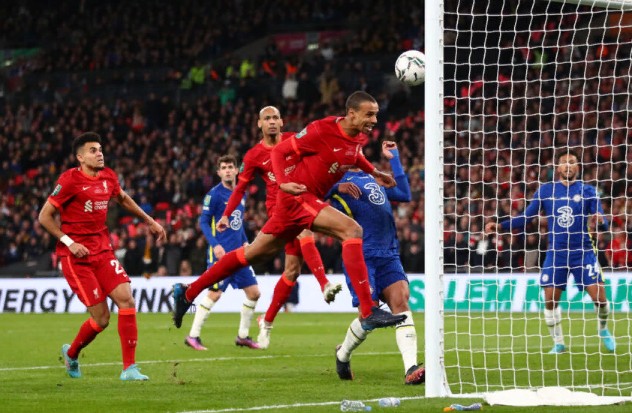 VAR deprived Liverpool of a goal in the Carabao Cup Final, and the fans are outraged.

For Liverpool, Joel Matip appeared to have scored the game-winning goal, but a VAR decision went against Virgil Van Dijk in spectacular fashion.

Right now, there are no words to describe the situation at Wembley Stadium. In the Carabao Cup Final, Liverpool fans went crazy as Joel Matip scored a fantastic header to give the Reds a 1-0 lead over Chelsea FC.

Those joys were short-lived, however, as VAR was summoned for a possible foul on Virgil Van Dijk in the build-up to the goal. The goal was disallowed after it was decided that Van Dijk impeded Reece James. LFC supporters, as you would have guessed, are stunned.

Extra time will be used in the Carabao Cup semifinals and final, which is likely to last 30 minutes.

There was no extra time in the opening rounds or quarterfinals. As we get closer to announcing a legitimate winner, that has altered.

In London, VAR has broken the hearts of thousands of Liverpool fans.

That was a really near call, but it appears that Van Dijk is only trying to gain a position with his body. The center back, like manager Jurgen Klopp, couldn’t believe VAR had ruled against him in this situation.

Chelsea, on the other hand, felt completely relieved. The Blues have squandered numerous opportunities in this final, none more so than Christian Pulisic’s excellent opportunity early in the first half. Mason Mount has also had many chances to put Chelsea ahead, but he has failed to do so.

This competition will be talked about for a long time. The referee’s VAR decision will undoubtedly be criticized as well, with everyone who loves Liverpool outraged by the way things went down.