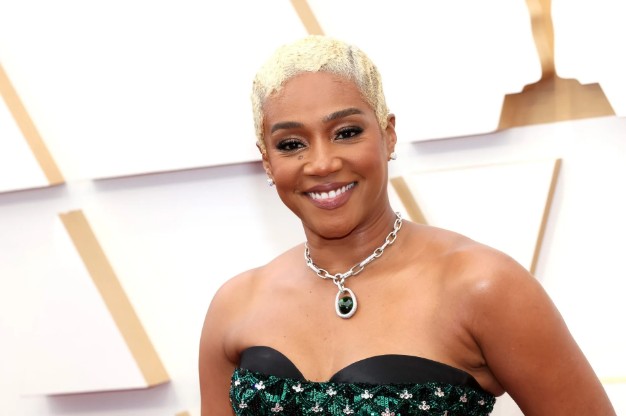 Tiffany Haddish responds to a reporter who referred to her Dolce & Gabbana gown as “a little costume change.”

People should know by now that Tiffany Haddish will always say what she thinks! When the comic checked in with a reporter on the red carpet, this was clearly the case. On Sunday, Tiff walked the red carpet at the Vanity Fair Oscars after-party.

Lauren Zima of Entertainment Tonight caught up with her for a chat. Lauren began their talk as the comedian neared the carpet’s sidelines by saying, “You do a little wardrobe change.”

Tiffany attended the 94th Annual Academy Awards, better known as the Oscars, on Sunday evening with her peers in the entertainment sector. The actress chose a dark-green sequined gown that hugged her curves and was strapless for the award event.

Tiffany had switched evening gowns by the time she walked the after-party carpet. Her style remained the same: strapless and figure-hugging.

Her gown was adorned with emerald-colored diamonds on the top half and lime green glittering fabric on the bottom half. As ET’s Lauren pointed out, the “costume change” was the difference between both dresses.

Tiffany makes a correction to the reporter.

“I’m not dressed up in a costume.” I replied to Lauren’s question, “I’m wearing Dolce & Gabbana.” Darling, it’s called an evening gown.I’m not getting paid for this. I had to pay for it. It’s tradition to say, “Thank you very much.”

Lauren leaned herself backwards and looked around while Tiffany responded. Her response seemed to emphasize her shame. Lauren remarked, “Time of death for me right now,” after Tiff corrected her. “You look really stunning,” she added.

Tiffany, on the other hand, persisted in correcting.Lauren was informed that “this is not an acting gig,” but rather “her life.”

Tiffany applied the mild pressure with her brows lifted and her head inclined to the side. In an apparent attempt to give humorous relief, Lauren used Tiff’s comments to tell a joke.

“When is your book ‘This What It Looks Like,’ and I’ll just read the whole thing?” Lauren asked.”That book isn’t coming any time soon,” Tiffany said, “but ‘I Curse You With Joy’ will be released in November.”

Breaking Through The Awkward Situation

Lauren sought to steer the topic in a different direction at this point, and the interview seemed to become a little awkward at this point. Tiffany, on the other hand, seemed to have her own set of questions for the interviewer. After debating why Lauren wasn’t wearing shoes on the carpet sidelines, Tiffany looked for any ill blood between them.

Tiffany smiled and replied, “I appreciate you.” “You’re not uncomfortable in any way?” she questioned Lauren. “I know, since you’re not wearing heels, you’re more comfortable than a mug,” Tiff remarked after the ET correspondent said no.

“I’m uneasy, but I look nice,” she admitted. “This is how it appears.”

Tiffany’s Thoughts on the Will and Chris Scandal

It got more and more interesting as the interview went on. The women talked about the Oscars’ most shocking moment: Will Smith slapping Chris Rock.

Tiffany declared, “I would classify tonight as a success.” First and foremost, I witnessed a man stand up for his wife, which is something we don’t see very often these days. That instilled in me a sense of optimism.

Following the confrontation, the comedian claimed that she spoke with Will and Jada and that they were aware of her support.

“I just know she better take care of business when they get home,” Tiff added, “because I know I would if my man took care of it for me.” I’m just stating the obvious. Hello! “

“I was overjoyed. I was thrilled, and I sincerely hope that more men are like that, who are concerned about their families. Isn’t it true that it’s not all about you? Sir, it’s not just about you.